Mohandas Karamchand Gandhi was one of the most important spiritual leaders in history, a man who was once eulogized as the spokesman for the conscience of a human.

Gandhi was given the title Mahatma—by Tagore—which is similar to the Western term saint, is credited with legitimizing India’s quest for freedom from the British Empire, easing the transfer of power in 1947.

But it wasn’t so much the result of his activism that led to his reputation—he wisely embraced a strategy of non-violent civil disobedience that spiritually and politically removed the yoke of British rule from India. People like Gandhi, those who inspire millions and change nations, are often the epitome of wisdom—they know things that most people don’t, and are willing to go to lengths that others would not dream of.

On the path on Gandhi

After getting frustrated with myself and the happenings around me, I planned to take some time off. I was mind-fucked, heartbroken, tired, embezzled, and disturbed. I had no time to look inside me but when I made time to look inside, I saw that I was lost and shattered. I had so many scars.

In college, I read a The Story Of My Experiments With Truths written by Gandhi that helped me. One quote changed my life.

I followed his advice and thus started a 4-year-long sabbatical. I packed my bags for Sabarmati Ashram. I stayed there for some months to take part in a series of spiritual retreat and learn Gandhian philosophy for self-development.

The journey on the path of Gandhi begins

The ashram in Ahmedabad is well connected with villages, communities and other non-profit organization across the state. I participated in various volunteering activities designed on the philosophy of Gandhi. I served with people from across the globe that helped me to widen my perspective. I not only learned about selfless service but also about non-violence, forgiveness, compassionate communication, kindness, gratitude, and compassion. The best part is that I also find a living legend who—according to me—is Gandhi of today’s time.

Gandhi was an Indian leader with clarity and insight. I don’t know how the world sees him but for me, he has been a messiah. There are many things to be learned from this man.

My experiments with truth

I have met so many people who have different views on Gandhi and his philosophies. It’s alright because I believe no one knows everything about him. We all are filled with half knowledge.

A couple of the philosophies of this great man has helped me a lot. The way I deal with people nowadays is completely different—it’s more compassionate. This story of how I changed the heart of a driver who jumped red signal changed millions of heats globally. By living a minimalist life, I and my wife are enjoying life to the fullest. I could also change my mindset and electrify an entire tribal village that I thought we never possible. 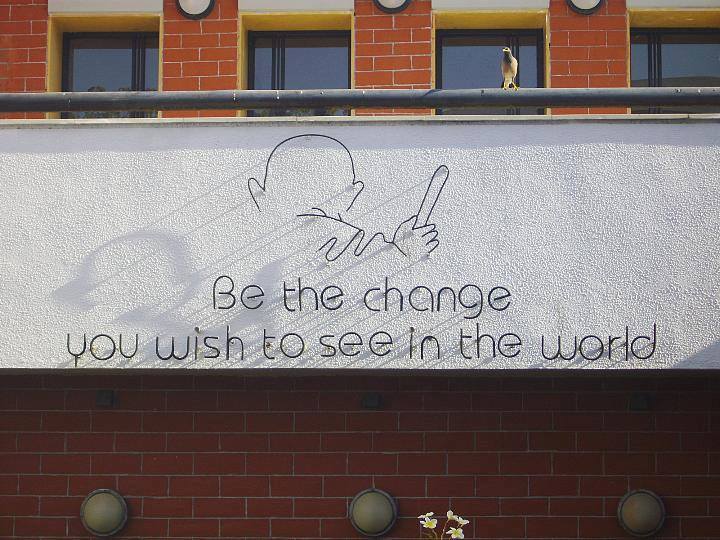 For four years, I also had my experiments with truth. Like Gandhi, I also got an opportunity to the look inside, fight for injustice, help the needy and BE THE CHANGE! Obviously, all of this can only be done with the support of like-minded people.

Generations to come, it may well be, will scarce believe that such a man as this one ever in flesh and blood walked upon this planet. Albert Einstien

I was fortunate to meet many living Gandhians in my journey and share enlightening conversations with them. One of them actually told me the reason why Tagore gave Gandhi the tag of Mahatma to this man. I am sure you’ll never know this one until you read that blog post or know Gandhi in and out!

I'm a Creative Pro, Healer, and Changemaker View all posts by Agastya Kapoor